Jesse Morris is married to a wonderful woman, Stephanie for eighteen years.. They have 5 children, Nicole, Sakura, Jesse Jr., Michael and Elizabeth.

Jesse started his cooking career in Chicago at Washburn trade school. He started cooking BBQ at age 17 and fell deeply in love with it and started development of his own BBQ sauce. Jesse says, “While my buddies were out playing ball, I was in kitchen with bunch of mess! I ended up working for the Drake Hotel. Both they and I knew BBQ was my love.” 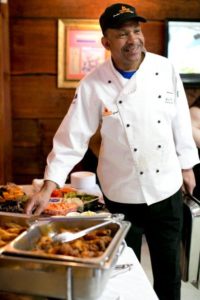 “I opened my first restaurant, a small diner, at the age of twenty-four. I then went work for Robison Ribs in Oak Park, Illinois. I also worked at the Taste of Chicago.”

He opened his first BBQ house called Jesse’s Ribs on the north side of Chicago and continued to work at refining and improving his sauce.

In 1995 he headed South to Harrodsburg, Kentucky and started selling BBQ on street corners. That proved to be a big hit and he finally opened another Diner, Old Happy Days. Jesse’s BBQ began getting TV coverage and write-ups in local publications. Midwest Food Magazine did a great story about his success and declared his to be, “The Best BBQ west of Alleghenies!”.

He began bottling his now famous sauce, Jesse’s Slooo Good and marketed it through chains like Kroger’s Supermarket.

Wanting a change of scenery and a slower pace, Jesse now has Cliffview BBQ & Brews restaurant right here in Cliffview Resort.  He has assembled a great team of family and friends. All professionals with years of experience and the shared desire to create and serve great food. His team includes his wife, Stephanie, family members and Pastor Joe Clay.

Jesse says, “I love smoking and cooking ribs, pulled pork, brisket and chicken. It’s all done with love of the art. This is the one old fashioned BBQ house where you smell the hickory, taste tender delicious meats and the sauce might just drive you crazy! Come on in, have a brew, sit down and dig in to our BBQ the old the old fashioned way, getting hands ‘sauced’ then licking them clean!”

The response has been almost overwhelming. Our guests from near and far are eager to eat at BBQ & Brews repeatedly during their stay in the Resort. Locals are making meals at Jesse’s restaurant a regular event. When the clean mountain air is redolent of the aroma from his smoker, it’s irresistible and the perfect ‘perfume’ for our peaceful Mountain Respite.