A single individual might have an idea for a business, but only a tight-knit team of executives can get it going. Once it is running, it takes a tight-knit staff to keep it going, to grow it, and to ensure it thrives.

However, maintaining an efficient team that works well together takes more effort than an outsider might think. Growing a company is difficult. Typical day-to-day stress, for instance, takes its toll.

A good team building activity goes a long way to helping developing new bonds and re-establishing long-standing ones. It’s one of the main reasons we highlight this is in our guide on planning a corporate retreat.

A tried-and-true favorite, paintball lends itself to a variety of team-based games. It is an off-site event, of course, but such favorites as capture the flag will provide an exhilarating, adrenaline-heavy afternoon.

For optimal results, it is best to shuffle all team-members halfway through the afternoon.

Required items include VR goggles and up to six escape rooms available on the Oculus or HTC Vive storefronts. This activity can be on or off-site. However, it is best done at a video arcade where people can divide into teams of four.

One person wears the goggles while the others watch the Chromecast and provide suggestions. Since the escape rooms often involve multiple levels, everyone gets a chance to go virtual.

This activity can be done on-site or even during a meeting. Teams divide into three or four members, and they develop a fantasy portfolio of stocks, bonds, and mutual funds. Over the course of the next six to eight weeks, they can sell, trade, and purchase shares. The team with the most money by the next meeting wins. 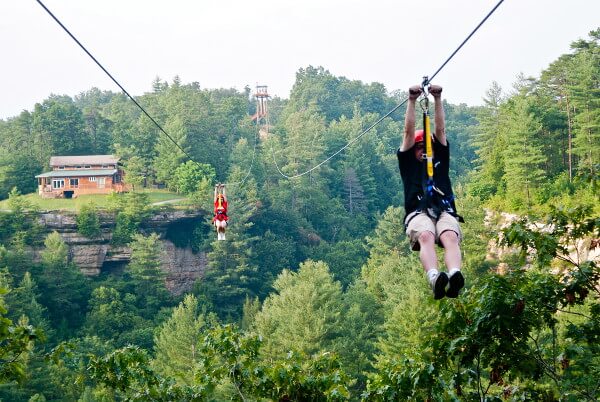 Another all-time favorite, ziplining evokes a sense of thrill or fear. It works best as a team-building activity when put into context of how fear kills productivity. For instance, for fear of speaking up, people might not share good ideas. Fear inhibits the ability to operate under pressure.

The key to selecting a good zipline host is finding one with a solid safety record and lots of “zips.” For instance, Red River Gorge Zipline has hosted 35,000 zips for the general public and a multitude of corporate clients since 2011.

Yes–you read that right: they have successfully supervised 35,000 zips. That represents a lot of conquered fear.

Running a company is almost as difficult as coming up with a solid idea. In this scenario, people divide into teams. Each team must then come up with a new “biz” product.

One team serves as the investment group and offers the prize to the winning idea. This activity is best done for companies needing to emphasize sales, target markets, and immediate growth.

6. Hero of the universe

Your company’s next get-together need not be dry and detached. In this activity, teams develop an idea that will solve one of the world’s most important problems.

Problems can be such things as homelessness, water shortages, or economic disparity. The idea behind this activity is that people must collaborate on how to solve what are often very polarizing problems. In doing so, they attain common ground.

Alien Peanut Butter is a game where participants attempt to explain to an alien how to make a PB and J sandwich, assuming the alien knows nothing about the ingredients or why you would do such a thing! The person with the most votes (no voting for yourself!) for the clearest and well-thought-out explanation wins!

This is an extended activity that involves teams spending an afternoon with their smartphones as they shoot, edit, and post a viral video. The team with the most views by the next company meeting wins. Rules should involve including some aspect of the company within the video.

For instance, teams could come up with videos integrating cats (an internet favorite) and copy machines (perhaps, a company product). Another option might be mixing baby photos and product marketing.

This activity should take place after work where liquor is acceptable. The teams should divide into groups and solve one of the company’s most pressing issues. However, the solution should involve an outrageous, yet viable, method.

The goal in this activity is learning how to brainstorm, going from the normal to the outrageous and back to the normal.

This activity is best at a local virtual-reality arcade. However, it can also take place in a room where people play on their smartphones. The idea is that people are assigned numbers and these numbers are drawn randomly to form teams.

However, the team members are not revealed to the people. Only the organizer knows. Instead, people must go around the room as people play games and help people they think might be on their team. At the end of the activity, the team with the highest score wins.

Non-artists and non-writers unite to draft the funniest comic strips. It helps teams release stress, and it allows them to vent–via comics–as they come up with comics that describe their frustrating, day-to-day, on-the-job experiences.

Comics poking fun at customers and executives are welcome in this game. However, the tables are soon turned. For instance, writers must then draft comics from the customers’ and executives’ points of views regarding the very same comics they just drew. This activity helps people see things from other perspectives.

Your next corporate retreat will be an all-out war, literally. During the first phase, each team develops fantasy technology that will destroy the world. Phase two involves coming up with technology that will either successfully destroy other team’s technology or defend their own. The last team standing wins.

This activity is best moderated by a staff member who can act as a spy. The moderator can also drop hints about teaming up with other teams, which, of course, enhances the team-building experience.

Escape rooms are all the rage, but for your next company retreat, a VR puzzle adventure can be just as enjoyable. Affordable and lively, an arcade with VR goggles is required as the puzzle must be Chromecast to a monitor.

One by one, each person wears the goggles and tries to solve the puzzle. Meanwhile, watchers attempt to distract and confuse the player by offering distracting suggestions and hints. The person who solves his or her puzzle in the least amount of time wins.

Fortnite is the worldwide sensation sure to make your next company retreat an absolute bash. An arcade with PC gaming will provide affordable access to Epic’s Fortnite where business clients can run battle royale tournaments.

People can divide into squads and battle online against each other. Just make sure you bring enough video game consoles to your retreat so that everyone can play!

Tiny homes are on the horizon, and this corporate event involves teams building the wildest, most extravagant tiny home imaginable–on a budget. Space is limited to 200 to 400 square feet. The best house design wins.

This is a paintball activity that pits a team of no more than three people against the rest of the company. Shooters can run. They can also, of course, shoot. If a zombie tags a shooter, the shooter becomes a zombie. The last “human” alive wins!

Eyebrow poker is will be a favorite at your next corporate retreat. It involves players pairing up and cheating as much as they can–using only their eyebrows to communicate with their playing partner. The trick behind cheating with your eyebrows is that everyone can see, so players must be cagey in how they attempt to communicate. This is one of the most affordable, fun games in the history of team-building retreats.

Of course, this activity takes place at a local putt-putt course. After dividing into teams, at each hole, each team devises a complicated shot for the other team to attempt.

Teams can play it safe and go for the traditional, easiest shot, or they can attempt the challenge shot devised by the opposing team. Successful shots are worth one point. Challenge shots are worth 650 points. Missing a shot is worth -100. The team with the most points at the end of the day wins.

19. Blind photography
This activity is best done in a scenic setting such as a local park. After dividing into teams, one person scopes for a location. Another decides on the shot. Another person serves as the camera guide. The final person is a photographer. The photographer must shoot the camera–with eyes closed. The team with the best portfolio wins.

For this activity, teams prepare ahead, off-site. During their off hours, they must craft the wildest–yet tastiest–dish. During the company retreat, this dish is then described in the most awful–yet accurate–fashion, and everyone gets to taste it.

The team with the most accurate, yet disgusting descriptions–combined with the tastiest dish–wins.

This activity takes place in a pub. A smartphone, trivia app is required. Players on one team read the other team trivia questions. A right answer results in a point. Each wrong answer results in that team receiving a “drink” point.

The trick in this event is that when a team accumulates seven drink points, each question thereafter is read with one word omitted. The result is the question being somewhat incomprehensible–because part of the question has been omitted.

The first team to reach 21 drink points loses. This activity involves no real learning outside of the trivia. It does, emphasize communication. Finally, it’s plain-old, fun, team building.

If you’re ready to host your own awesome team-building company retreat, give Cliffview Resort a call today at 888-596-0525! We can provide you with a quick, no obligation quote based on the dates and the number of attendees you expect.